Taking the Long Road to Cairo, by Ann Balcombe 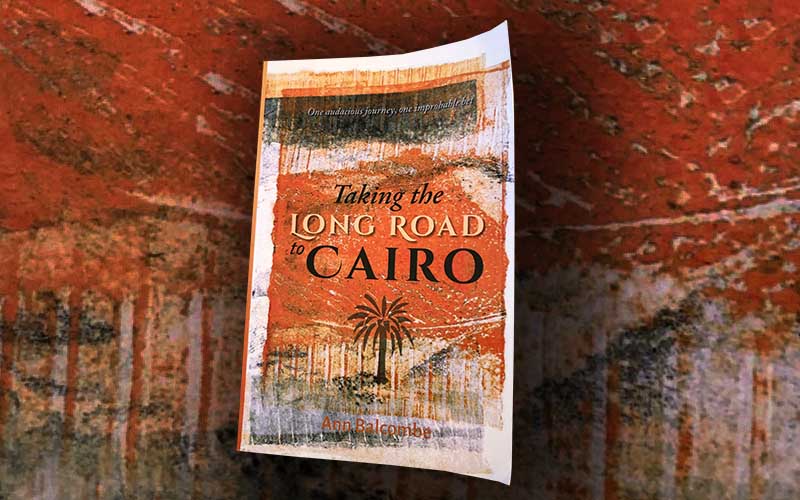 Ann Balcombe’s story is of a fearless young woman who gets on a boat in Auckland and ends up, a couple of years later, in Cairo, via lots of big seas and a whole lot of road. It’s the 1970s.

There is a special place in history for intrepid women who sail across the world into the unknown and go exploring with open minds and courage. I’m in their boots in spirit.

I know Ann. She’s a remarkable woman; intellectually active; great company. I’m not surprised she did all these things when she was young because we turn into the sum of our experiences and she’s brim full. We met on Whitireia’s creative writing diploma and Ann insisted the book was a personal memoir, an attempt to put her diaries in order, something that might be interesting for friends and family. Sweet, we thought. Until she began unearthing her material and spreading it out to pick through.

When we came across the Nile crocodile it was out of the water, lazing full length on top of the mud.

That’s about as sweet as it gets. Oh, wait, there’s the scene with the orphaned baby hippos on the bed… and the one where she carefully touches the white rhino in the boma…and the ceremonial dance in the Omo Valley… But I’m getting ahead of the story, tempted by highlights that jump out of every chapter.

Ann admits she was a “different” child. Her kind of different might be admired today, but in NZ in the 50s and 60s a free-range girl with a skeleton collection and a joy in mudbanks and maps might feel lonely. She observes, she draws, she studies. It’s no wonder she eventually goes to sea.

The story opens with “Sailing from Auckland to Durban,” which sounds jolly, but isn’t. It’s exhausting reading and by the end of the chapter I couldn’t feel my toes. Skipper probably would have lashed me to the bunk. There are some glorious highlights but mostly sailing sounds relentlessly hard work. I have removed this experience from my bucket list. Thanks, Ann.

When Ann steps ashore in Durban she is an inexperienced, foreign young woman, but these are the apartheid years and she is white, the implications of which are immediately apparent. She looks out from her privileged eyes at the insanity of the regime. Her politics are grounded bearing witness to incident after horrific incident of racial discrimination. The chapter, “Face to face with political reality,” should be compulsory reading in schools.

God knows why she then accepts a bet (it’s that different child coming out again), rather than simply going home. Hey, let’s hitch-hike the length of Africa, says a friendly Australian called Jim. Ann is not the sort to shy away from a challenge, so they bet some friends they’ll meet at the Munich Beer fest in one year or two years, however long it takes to travel overland from Cape Town to Cairo.

I love the packing list. I give more thought to a weekend walk in Abel Tasman. Ann paints a kiwi and a kangaroo on the packs and Jim takes a pipe, trumpet, recorder, ghetto blaster, a knobkierie. There is no room for a tent, but there are Leonard Cohen cassettes. And so begins a journey that brings them face to face with wild animals and wilder characters, possibly the most uncomfortable hitch-hiking in the world, unfamiliar history and brutal politics, the inadequacy of cold cream for elephantiasis (she thanked us, says Ann simply), surprising landscapes and rich local stories and a long, slow road though countries constantly on the edge of crisis.

This is terrific and edgy reading. I still laugh at the memory of Ann saying the story will be interesting mostly to friends and family. She is too modest, perhaps, to grasp the fascination of Africa and the appeal of a story, well told, by the intelligent woman who did the walking.

Great book. Give it to your adventurous traveller friends for Christmas.

Taking the Long Road to Cairo, by Ann Balcombe
$35 incl P&P from Hingaiapress@gmail.com

One thought on “Taking the Long Road to Cairo – book review”