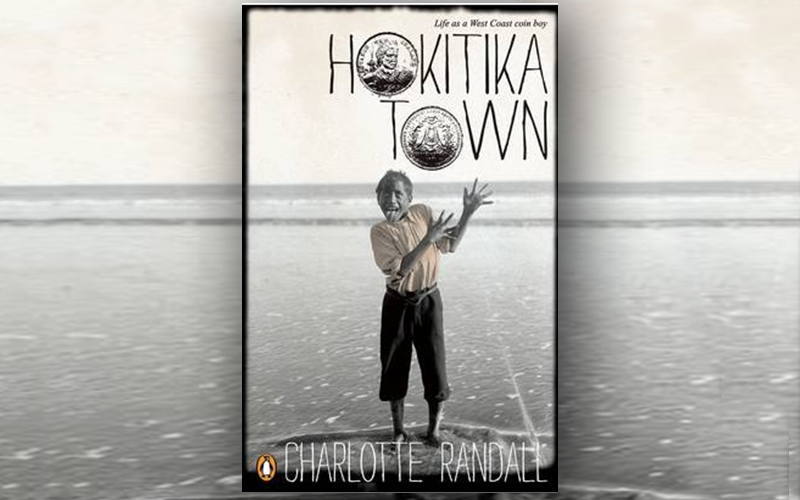 A while ago someone told me their cousin/sister-in-law (can’t remember) Charlotte Randall wrote New Zealand books and I so wish I could remember who it was because I want to thank them profusely. I’m reading my way through all Randall’s novels and thoroughly enjoying every page.

The Curative is set in Bedlam and is funny. I’ll reread it before reviewing, but thoroughly recommend it. The Bright Side of my Condition , again, is bleak and hilarious. Both of these books are told by people who, after some life-changing event, have little of anything left other than the insides of their heads but what goes on there is imaginative as hell. Randall seems to enjoy exploring the inner madness of men.

Hokitika Town is the same. Homeless Halfie is telling us about his life in the Gold Rush days of the West Coast and it’s not a straight story. We pick him up in Hokitika when he’s about twelve and he’s running errands and washing dishes, anything for a coin. Two things stand out immediately: he is a Māori boy and speaking to us directly in a transitional language as he leaves te reo and picks up English. I salute Randall for the breaking of these two rules: pakeha writing Māori and writing ‘dialect’ in the painfully mangled English that comes out of the boy’s mouth. Both work.

Halfie is empathetic and kind. He makes friends with the better part of troubled people and wants to do the right thing. He doesn’t always know what this and gets tangled in knots trying to second guess why Fatso and Prosper want to squish One Eye and if One Eye goes to jail what are the knock on effects of Fortunautus giving him free binarnas for life. It’s complicated, I couldn’t keep up with the plot twists but neither does Halfie and his misunderstandings lead to more confusion. He lives in a tree, a hut in the bush or shares a hotel room with his down-on-their-luck companions, all of whom adopt him as a kind of mascot. You can’t help loving Halfie. It’s sad, but funny, too.

He hangs around a hotel where the pantaloon girls ply their trade and is befriended by a prostitute, Violet, who he tries to look out for despite her delusional aspirations. She’s a tough customer and seems like a woman who knows how to get on in the world. It’s not until much later I clocked that Halfie is not seeing the world with adult eyes. “I say stop with telling me what to do, and she say she fifteen years old so she the grown up.” There’s a lot of vulnerability in this story.

The initially off-putting written dialect morphs into genuis. “Never write in dialect,” every writing school teaches and Charlotte Randall sticks up her middle finger and gives us Halfie’s glorious development through language.

“Inglish a tricky langwich and yer can get up the wrong tree bark very quick,” says Halfie. “I pretend to be a tiger in the jungly. Ludo always say, no it J-U-N-G-L-E, but jungly sound more dark and twisty.“

Halfie mangles and fights his way through English comprehension in the language school of weird and wonderful. His teachers are drunks and immigrants and his words reflect his world. Here’s English on the hoof:

‘She aint a dancing girl, always calculating what she stands to lose in being so proud. Her pride is all she’s got to lose.’
‘Eh? What she pride of?’
‘Yer mean proud.’
Do I? Fuck me. This one of them stupid Inglish words that keep on changing itself.

There are a bunch of characters in this story: the good, the bad and the ugly, but Halfie mostly sees the good. You get the feeling it’s not naivety as much as generosity of spirit in the boy, and a turn for comedy. Here his two elderly down-and-out companions are dressing for a formal dinner:

In our room Ludo begin his own fussing. He fuss over his coat with the fish tail, then he fuss over me. Kaspar bring out a suit that look like he wear it to visit the King of Prussher then the King throw him in a dungeon for a hundred years. Ludo offer him the turpentine, but Kaspar laugh like he pleased his expensive suit have gangrene. He sure have fun being disreputable.

I had fun with Halfie and his disreputable companions. A kid learning English is an unusual choice of narrator for a story but don’t skim a few pages and be put off. Once you tune in to his language and take off, he is entirely engaging.