Beautiful world, where are you, by Sally Rooney 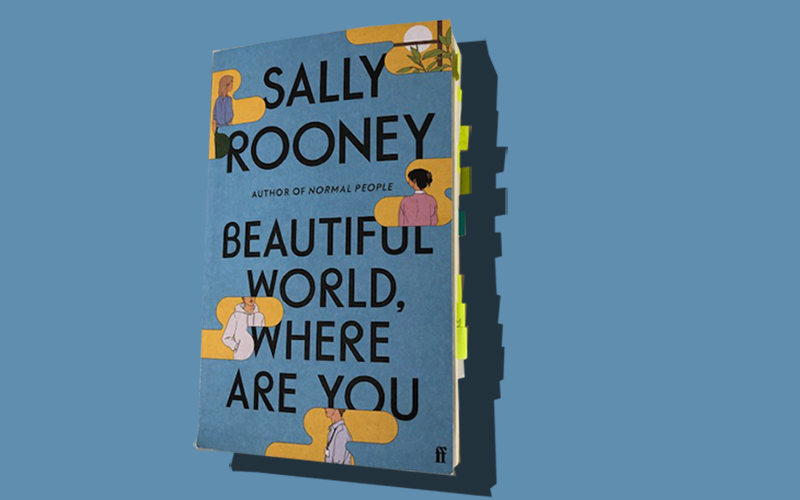 Funny how Sally Rooney’s books have such misleading titles. Normal People a case in point. Conversations with Friends. Welcome to Rooney’s beautiful world of normal friends. In this case it comes with a twist at the end — enough to redeem her? I’m not sure.

Sure, Rooney is, and writes like, a young woman who zings in an exciting new way. Rooney mixes choice mundane close ups: Removing a stick of mint gum from her handbag, she unwrapped it and put it in her mouth; with whole themes in a sentence: Do you think the problem of the contemporary novel is simply the problem of contemporary life?

There are a lot of big, interesting themes in this book, written almost as essays, some really sit-up-and-think clever. Like the idea that personality is changeable — [life] doesn’t get fixed into a grove called ‘personality’ and then run along that way until the end. Love that.

It’s just unfortunate that these ideas come from a group of dysfunctional navel-gazers. All Rooney’s women are terribly literate and bright but hopelessly anti-social in a sad, detached way. Our main narrator here, Alice, is described by her boyfriend as ‘stuck-up’ which applies to the aloofness of all Rooney women: painfully shy and ashamed and rather desperate to be seen as normal. She and her only friend Eileen write these long, literary emails to each other, deep with philosophical angst. I couldn’t ever tell them apart except one is richly successful and the other not. And the richly successful one has made her fortune writing a couple of novels which she is forced to travel to promote.

One woman writes, and I can’t remember now if it’s Eileen or Alice: What if I’m the one who can’t let myself be happy? Because I’m scared, or I prefer to wallow in self-pity, or I don’t believe I deserve good things, or some other reason...I almost want the worst to happen sooner rather than later, and if possible straight away, so at least I don’t have to feel anxious about it any more.

Alice and Eileen spend most of the book, when not writing extraordinary emails, having anxious love lives — of course they do. And in the same way the women have the same voice but different lives, their blokes also are very different on the outside but strangely similar in the head. One’s a politician and the other a bit of rough, but they’re both equally mindful while having sex.

Would these blokes love these women? They apparently have lots of options, where the women seemingly have none. This book seems so close to personal experience the answer would have to be yes, in Sally Rooney’s world.

Beautiful world, where are you. A book for intelligent young women who enjoy gazing at other people’s navels.