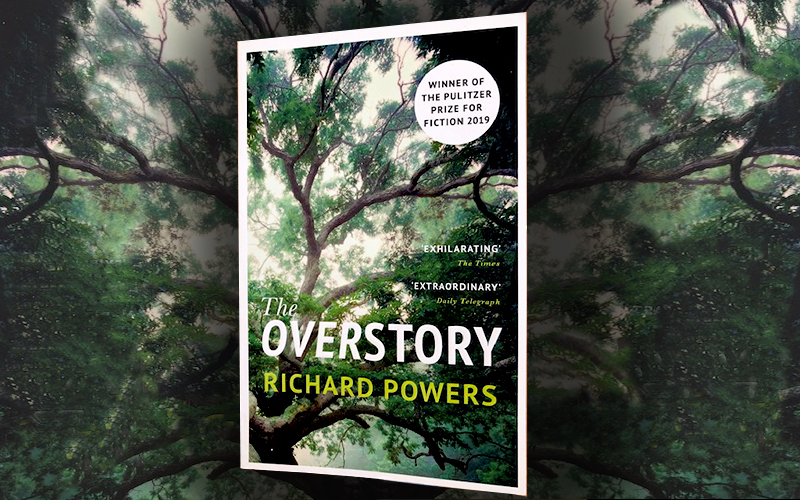 This is another commitment book. I might have got on better with a rest before the attempt, having come straight out of some heavies. A chick lit or comedy, perhaps, to give a bit of a breather. It did overwhelm me, as I think a forest probably should, but not in a good way.

I persevered with it, through the numerous characters and their overlapping stories, because the theme is so important. The theme is that trees — or more particularly, forests — are the life blood and lungs of the world. We humans are destroying them at a horrifyingly alarming rate and something should be done.

Powers is preaching to the converted with me, and I guess with most people who engage with the book. If his hope is to wake the world up to the fight against the devil machine of capitalist greed slaughtering its way through the natural world, this is too much. It’s like that friend who has only one fight in them and every conversation on any subject turns, inevitably, down the same, proselytising, road. The book is single-mindedly American, too, in the way that Americans take responsibility for the world and other cultures and places exist only in their relationship to the USA.

There are eight or ten separate stories: all people who we meet at the beginning of their tree journey (sometimes generations before), who ultimately come to realise trees are magnificent and need to be treasured and they fight the evil forces who destroy forests for profit. This hits the zeitgeist, think fisheries and seabed trawling, for example. These introductory short stories are all of journeys that lead people to admire trees, be inspired by trees, grow trees, study trees, make computer games about trees, climb trees, live in trees. I enjoyed them, though they’re all singing from the same hymn sheet.

There are some wonderful bits here. Here’s a love letter a character writes to his wife. Read this and feel your knees go wobbly:

Take it out of context and it’s just gorgeous. (Unfortunately, in context I disliked both the characters and they’re not happy in love).

A few hundred pages in, though, some of the characters begin meeting up, but by then I had forgotten the earlier ones and it took me a while to recognise them in the new characters’ narratives. The next 500 odd pages jump around all these characters merging their back stories in three or four of continuing narratives. Bit complicated.

One thing Powers does brilliantly is describe forests in all their fabulous diversity and it’s not all massive trunks and lofty canopy, though there is plenty of that. Here’s a scientist gathering specimens in the undergrowth: She works all day in the woods, her back crawling with chiggers, her scalp with ticks, her mouth filled with leaf duff, her eyes with pollen, cobwebs like scarves around her face, bracelets of poison ivy, her knees gouged by cinders, her nose lined with spores, the backs of her thighs bitten Braille by wasps and her heart as happy as the day is generous.

We need to see forests, Powers tells us through his characters, as an interdependent biomass. Trees are a collective, helping each other grow and sending messages via chemicals that link the root systems and aerosol signals through the air. Seen in this way each particular forest may be millions of years old. There is a discussion about trees gaining personhood in the law, able to sue humans for theft and damage. This is not absurd, New Zealand did exactly this with the Whanganui river. Many of the discussions Powers raises do make you look at trees in a more respectful way, although the emphasis is a bit focussed on what trees can do for us (drugs, anti-global warming etc) rather than what we can do for trees.

Many of Powell’s characters come to their love of trees through a chance epiphany, a few of which seem religious and some plain weird – like the selfish student who electrocutes herself and starts following tree voices that dictate her life. Yeah…nah. There is a bit of repetitive point bashing, which, should anyone who is not already a tree-lover pick up this book (though why would they?) would reinforce the perspective of tree-hugger as a lefty-looney to be avoided.

There are extraordinary descriptions of both individual trees and forests in Overstory. I liked all the trees. I didn’t like any of the the characters, particularly. Their stories are all sad. And at the end of this drawn out narrative there is no final pulling together for a positive ending, or anything hopeful at all. None of the characters lives happily ever after, all the main characters have terrible endings. In one case it seems the author thinks he may be going too far and so gives two endings leaving the reader to chose whether they want the character to suicide or survive. Thanks.

I actually feel depressed after reading this book. We are up against too much. The forests are falling, the climate is collapsing and we insignificant individuals are powerless to prevent any of it.

OK, this review has gone really pear shaped. Sorry. Maybe not a good book to read in lockdown. If you want people to get excited about trees, don’t give them this book to read. Go for a tramp in native bush. Sit under a tree by a river. Watch the birds. Smell stuff. Pitch a tent.

One thought on “Overstory — book review”