Ribbons of Grace by Maxine Alterio 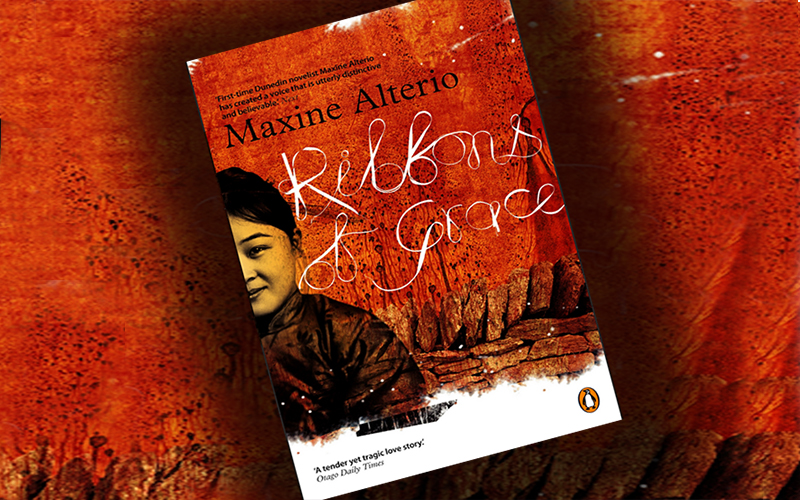 ‘Early this morning the sun rose round as an orange and hot as the fires of love, warming the already dust-dry ground outside Con-Lan’s schist cottage, while inside the whitewashed walls gleamed like skin on a pail of milk.’

Maxine Alterio’s writing is transporting. I copied phrases of this evocative elegance onto scraps of paper and peppered my desk with them. How’s this to set your mind soaring?

‘In the gorge the ice-heavy river resembles a mass of broken glass. On either side poppy seeds, dropped from the soles of boots worn by miners from California, germinate in pockets of dirt and shingle. Soon they will flower again and hang like coloured lanterns from the cliffs.’

One more example, then I’ll get onto the story. Here’s a first impression of western women:

‘Their women wore long skirts, jackets and bonnets. Wisps of colourful hair sat like small surprises on their pale foreheads.’

Ribbons of Grace has three woven strands, each told intimately in first person. ‘Only way to discover truth is to tell many-sided stories,’ says our first narrator, Ming Yuet. Spot on! She runs away from a systematically abusive culture on the Pearl River delta, assumes her murdered brother’s persona and arrives in the Otago goldmines to a different kind of systematic abuse. History is full of such horrors. In the ravines she hears a fiddle playing and meets Conran, a decent man from Orkney, who takes up their story in the growing settlement of Arrowtown. Conran’s narrative introduces Ida and her family, and I like to think there were many Idas in colonial New Zealand – strong, capable women going about the business of keeping their men in order and their communities together. Things get complicated (of course they do!) because Ming Yuet is disguised as a man so Conran is not only consorting with a Chinese, but also his manliness is questioned. Ida steps in to right things, but any happiness in this story is fleeting.

I did occasionally find the chartacters’ direct expression distracting. Ming Yuet is uneducated, and her translated thoughts, eg. ‘Benevolence extends beyond this life’, sound like the author’s. The Scottish and Chinese accents also stumped me a few times. ‘..he lives tae far oot o toon’ is great Scottish if you roll it around a few times, but a reader wants to get on with the story. And Ming Yeut’s ‘I do on Con-Lan’s shilt’ doesn’t translate in my head to: ‘Conran’s shirt’.

A last quote, though I could fill pages with extracts from this story. This image of a daughter understanding her mother illustrates how empathy can reach beneath the veneer of historical fact and explore how people felt. And how people felt explains history.

‘Two days later I asked MaMa if she remembered undoing her bindings. She looked surprised, as though I had unlocked an aspect of her past with a key she did not know I had.’

Ribbons of Grace is gorgeous reading and a strong recommendation for a book club.