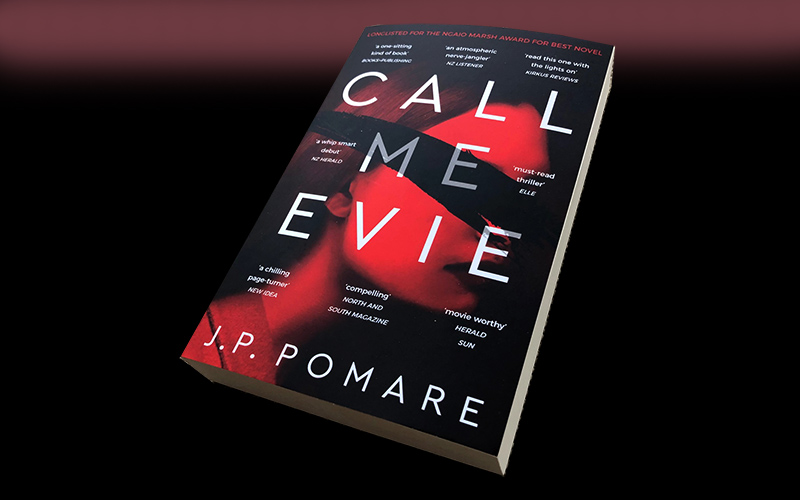 Generally speaking I avoid books with red and black covers and an image of a traumatised girl. So much crime/horror treats murder, rape, kidnapping of young women as entertainment.

But I met the intelligent and likeable J P Pomare at the Hawke’s Bay Arts Festival and realised all the fuss about his book might suggest I have my genres confused. “A top-rate psychological thriller,” said a friend in the know. “Literary suspense” said another. I decided to overcome my prejudice. I picked up red-and-black Evie.

I realised at once I had opened an unusual book.

The writing is gorgeous. It reads like literary fiction with pared back text giving the reader room to look around. And Evie breathes. She’s no puppet for the narrator to toy with, but an unpredictable teenager, doing unpredictable shit, the way teenagers do. Her friends are supportive and jealous and loving and nasty, there are incidents and accidents. Situations on the verge of spiralling out of control. Kids at a party falling out with their friends, fighting over stupid things, tears and make-ups, misunderstandings.

“Isn’t it amazing how quickly plans can derail, how life can break apart like a flock of startled birds?”

Call me Evie is told in two timelines. Leading up to the incident Evie is Kate, a teenager in Melbourne living with her dad. Mum has died some years before. There is a slighted friend, an intensity with the boyfriend. Enough to make you read cautiously. Things gather and snowball. This story dovetails with the later situation, after an incident that sits on the horizon. Jim (who is Jim?) has Evie held captive/held safe from the fallout in a house in Maketū, a quiet town in the Bay of Plenty. Even the town has a personality; isolated, disconnected. Both safe and sinister, depending on your point of view.

The latter story feeds the earlier, but unreliably. Memories can be messed with. Evie doesn’t remember clearly what happened and Jim is hiding a lot of the horror from her. Her relationship with Jim is excruciating and you know, you know, there is something you’re not getting about this whole thing.

I got it, finally. You stupid, stupid girl, I thought as I waited for the details to fall into place. But wait. J P Pomare hadn’t finished.

Much that I love to be different, I’m going to agree with what everyone else is saying. If you liked Gone Girl, you’ll love this.

One thought on “Call Me Evie – book review”