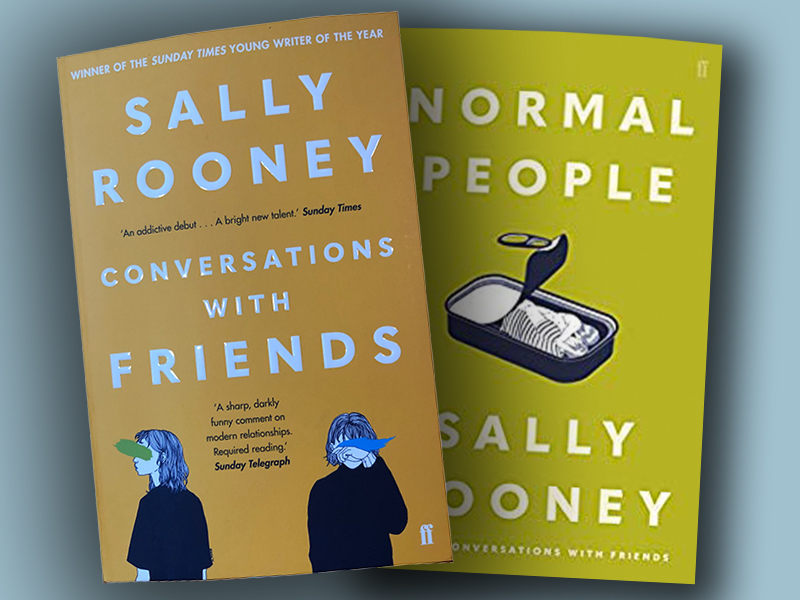 Sally Rooney is my new discovery. Sure, I’m behind the play on this one, the last two years have seen her plastered with awards. Don’t ask me why she is so good, I find it hard to say why I find the lives of twenty something Irish students and their friends so compelling. They don’t go on adventures or do remarkable things. Their journeys are mostly internal and all about relationships. They’re going through the  pretty mundane stuff of growing up, involving incidents that you’ll probably recognise, things that you or your friends might have struggled with.

The two books are similar, each with the main character a very bright girl at university in Dublin, with family issues pulling her emotional strings and intense friendships.

In Normal People she’s the swotty girl who is a misfit at school, but finds her quirky intelligence makes her popular on campus. She’s in love with a boy whose life goes the other way: cool at school but his popularity doesn’t transfer to university.

Conversations with Friends has a similarly bright, edgy girl who breaks up with her school girlfriend (another smart, sassy young Dublin girl — how autobiographical is this…) and the pair form attachments to an older married couple.

The girls in both stories cope with their troubling family backstories by self harm and experiments with maschosism. I hope Rooney will break this theme next time.

So far I haven’t given you much to excite you about these books, which is a great disservice and I should have said at the start that they are both really, really good. Each character has distinct motivations and desires that you can feel as they entwine and you learn about characters from the responses of others. I caught myself thinking, as I would do for a friend in a complicated relationship: Why did that not surprise her? Couldn’t she see that coming? Wake up, you fool! Every relationship in the world is exceptional, and in each book you are the confidant of  an intelligent women (and a male protagonist in Normal People) if not exactly asking you for advice, because one of the problems is that they’re not good at asking for help, at least showing you their take on the world, and from that you extrapolate to every relationship you have ever judged.  Rooney gives you a frame on which to hang your own experiences. You’ll find yourself talking to the book. “Just tell him you’re in hospital!” I shouted at Frances (who, to be clear, isn’t a real person but just some words on a page). “You’re not listening to him, Marianne!” They may have heard me, but like all friends to whom you give advice, they paid no attention and went on blindly misunderstanding the glaringly obvious. They kept me racing along, slapping the pages in frustration.

The stories have different plots, but in both are driven by a “will-they-or-won’t-they” tension (have sex, fall in love, cement their relationship, live happily ever after). And of course the answer is not linear and has many levels of complication. There is lots of angst with physical and mental health issues, parents and family problems, money, class and existentialism.  Frances worries that “…if I did turn out to have a personality, it would be one of the unkind ones.” Hell. I was twenty-one once, and worried about that, too.

The characters communicate in snappy prose; in Conversations with Friends the two girls are spoken word performers and this feels like Rooney’s writing style, thoughts pared down to the essence. There is not a boring phrase in either book. There are dialogues, texts and letters full of one liners where a couple of words stand in for paragraphs of explanation. Rooney trusts her readers to fill in the missing beats of the pulse.

I’ve been recommending these books to friends who ask me which to read? (Both, obviously, there are two.) Which to start with? I read Normal People first and that worked for me, though Conversations with Friends was Rooney’s first book. Doesn’t matter. Buy both and read the one on top first.