This Mortal Boy, by Fiona Kidman 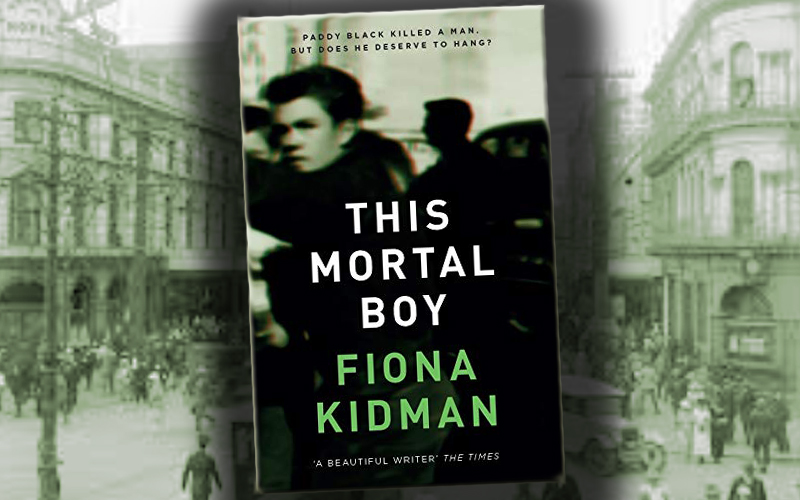 Paddy Black killed a man. But does he deserve to hang? The question on the book cover is no hook. Our answer is instinctive. We don’t hang kids. But we did.

This is a bleak story, with not much to love here. Not the characters, who are all flawed and self-serving; some have my sympathy, but not my love. Nor the setting, which is a dingy and bleak 1950s Auckland, set around squalid squats, drinking joints and the streets of Mount Eden leading to the jail. The judgemental society of the time and place will break your heart.

So, not many laughs in this book. It’s the story of a boy who goes wrong, and we step along his path with him–and I mean really with him, in the compassionate way Fiona Kidman does frighteningly well–to his very preventable death. Paddy Black stabbed a man in the neck as he selected a song on the jukebox after the man had been harassing him, and became the “jukebox killer”, a boy defined by a single act of violence. Kidman does not make the mistake of trying to explain his intention in the moment. I find the stabbing hard to understand, but this difficulty gives the story its guts.

There are lots of reviews of this book, which yesterday won the Ockham prize for fiction (arrgh, should have posted this review yesterday), so I won’t go into the whole backstory of Paddy’s immigration and mother back in Ireland and his efforts to fit in, all of which are well reviewed elsewhere. What I found so fascinating in this book was 1950s New Zealand.

This was my parents’ generation and I thought they were a dull lot, a bland filling between the war and flower power. Conservative, repressive, the breeding ground for the peace-and-love 1960s. Kidman blows this theory away with Teddy boys, bodgies, widgies, and heartless sexual promiscuity. She illustrates the deep, largely generational gulf of the decade. Paddy, the young delinquent immigrant, represents one side and on the other, as Paddy’s lawyer says, were  “old codgers. ..the sort who believe every word of the Mazengarb Report.”

To understand the background to This Mortal Boy, The Mazengarb Report is good reading. In 1954, the government was so concerned with declining moral standards of youth they commissioned a report into the causes and sent a copy of the result to every New Zealand home. There were a couple of main catalysts for the enquiry: the Parker-Hulme murder in 1954 (we’re all seen Peter Jackson’s Heavenly Creatures, right?) where girls “abnormally homosexual in behaviour” murdered the mother of one. And secondly, nice kids in Petone were having under-age orgies and one girl told the cops about the “Milk Bar Gang,” which sounds a bit Happy Days, but decidedly wasn’t. The background to Paddy Black’s story of sex, parties and hook-ups in Ye Old Barn Café fitted the theme of debauchery neatly.

Mazengard advocated a return to Christianity and traditional values. Paddy had grown up with parents who loved him, a mother at home and plenty of religion. But he was away: lonely, misunderstood and disconnected from his roots. Nothing Mazengard suggested would touch the source of this young man’s devastating flash of anger.

Unfortunately, Black’s jury recognised none of this complexity and was determined to punish this representative of the dominion’s delinquent youth. Not to a man, and the tension in the novel as the jury circle around is almost unbearable, even though we know the outcome: the blurb tells us this is the story of one of the last executions in New Zealand.

Someone once said to me “our jails are full of good boys who do stupid things.” I hovered between punching him and crying. (Mr Adams, you got off lightly). They hanged Paddy.