Sticking with pigs, by Mary-anne Scott 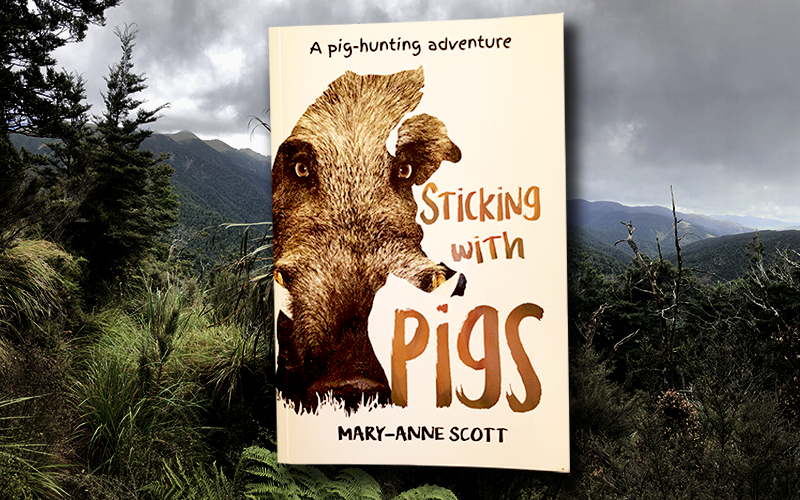 A fourteen year old boy, wrapped lovingly in cotton wool, goes out into the New Zealand bush with his uncle on a hunting expedition.

His parents have good cause to worry. The boy’s named Wolf, so you know they’re not precious by nature (named for Wolfgang Mozart, but sounds like his parents love a rough diamond to me). But Wolf has a chronically sick brother whose illness, as it would, dominates every safety decision and going hunting is not a walk in the park.

Lots of kids say they’d like to go hunting. I’ve never hunted, but I have friends who say they’d like to come tramping with me – a shadow version of a hunt but involving going bush with plenty of frightening-lite experiences. Mostly the friends are all talk and no trousers; when you start describing the hill tracks and the bare huts and the long-drops the enthusiasm wanes.

To Wolf’s credit, he trains up and off he goes with his uncle Jem and the dogs and the knife (no rifle, because to appease Wolf’s gun-shy parents, as the title says, they’re sticking with pigs), up the long haul to the ridge line, deep into the NZ bush. Scott doesn’t give a location, could be anywhere, but feels like the Ruahines to me.

If a kid can learn instinct, this is where he learns it.

There are wasps and pig shit, steeper and steeper hills, gullies, water and bush. I won’t give the story away but yes, there’s a pig. Then the trouble starts and Wolf gets his coming-of-age challenge slammed down on top of him, as raw and as kiwi as you like.

There’s a girl and a man’s mate at the edge of the story. I recognise both these characters. She’s an outdoor chick, handy with a GPS and long treks up the hills, practical, good in a crisis. I can see why Wolf fancies her. Uncle Jem’s mate has a pre-packed rescue kit and will walk through the night, no question, not much conversation. Everyone needs a mate like him.