Impressions of Toronto walking by day, jazz by night 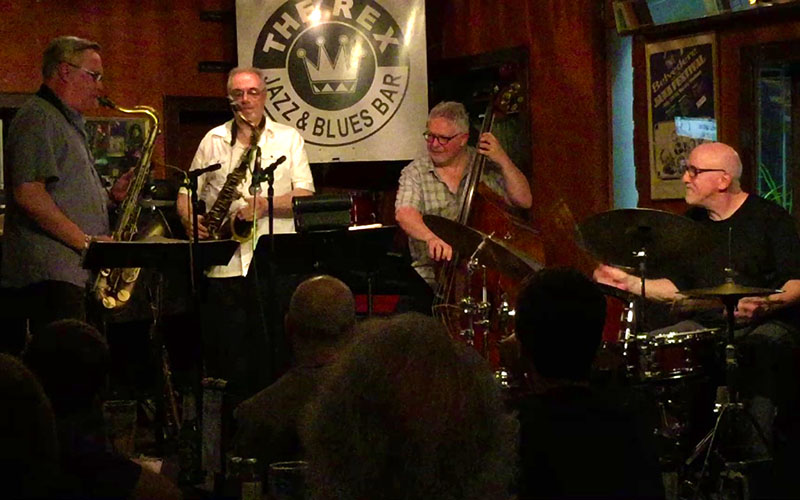 Toronto sprawls flat and is scratched with expressways, to the north of a great lake that is pretty much invisible from the city behind a barrier of industrial land, rail and roads.

It is mostly devoid of geographical features other than the gash of the Don Valley. This is crossed by a wonderful viaduct whose story comes alive in Michael Ondaatje’s passionate book In the Skin of a Lion, thought this doesn’t feel like a city for authors.

We drove around similar looking suburbs for hours behind huge gas guzzling vehicles with single occupants (and wondered about their compensation issues) on busy four lane highways that swoop through Toronto’s grid of streets, past bunches of high rise condos and stores selling stacked cheap goods and through dirty, dispirited neighbourhoods. The occasional group of brick facade terraces – old houses which have been kept for their historical value – just served to emphasise what the city might have looked like if it hadn’t sold its soul to growth and convenience.

Public transport is accessible but old fashioned, and locals complain not joined up – city, district, state, national.  Take a metro ride just to witness the wonderful diversity of faces. Toronto’s trams are famous, they do the job of a subway above the ground and we jolted through the nicer part of town around Dundas and Yonge before a pleasant walk through the leafy and quiet University of Toronto. There’s old money and designer shops here. Some grand buildings from the early days of the city remain – they looked straight out of Glasgow, heavy squat stone churches, civic buildings and an old museum with a sharp glass extrusion sicking painfully out of its side, as risky as the glass pyramid in front of the Louvre in Paris and less successful. All framed by the towering glassy skyscrapers that cluster all over the skyline here. We explored the more youthful Spadina Ave by foot, the miles of poor shop fronts relieved by some hip fashion spots, through one of Toronto’s China Town’s (there are a few) and we sat on a trendy roof top bar in the muggy, late summer heat with a vibrant, smart crowd of after work drinkers.

Later, we went to The Rex and lucked out with the best of the city’s jazz – the Pat LaBarbera and Kirt Macdonald Quintet playing their annual birthday tribute to John Coltrane. Neil Swainson on the Bass was something else. A charming elderly bloke squeezed on our table and had an entourage passing all evening to greet him. He’d taught them all to play the sax. They’re friendly in Toronto.

We’ll make the effort to cross the tracks and see Lake Ontario and the city islands tomorrow.