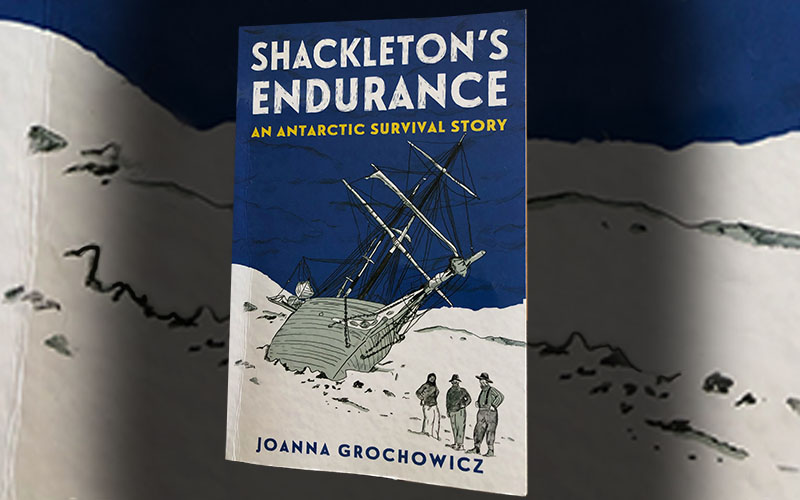 Complained about the cold lately? Snowflake! Shackleton’s Endurance will knock that out of you. Comparatively, you have never been cold.

An editor at The Sapling thought author Joanna Grochowicz and I might get on because we both write YA historical fiction, so set us up for a mutual interview. She wasn’t wrong, we had a blast, and I will post the resulting interview here. We’re both obsessed with historic sea-faring, extreme conditions, cold, group dynamics and survival. How lucky are we to meet up?

Joanna is an established polar historian with previous books on Scott and Amundson and when we spoke she was off researching an 1840s Arctic exploration. I hope she’s keeping warm.

Shackleton’s Endurance was the name of his ship, and that pretty much sums up the story. “By Endurance We Conquer” was the family motto and they endured more than seems humanly possible on this Antarctic exploration. It was 1814, war in Europe had just broken out and, as if there wasn’t enough hell on earth already, Shackleton goes through hell and high water to equip a ship and enlist men to walk across Antarctica. Why? Because no one’s done it and he wants to be first. He knew what he was getting into—he’d done two treacherous trips to the ice before. (And after this trip he goes back again. Hard to imagine.)

Hugely ambitious and single minded, Shackleton leads the journey from South Georgia (a pretty inhospitable island in its own right), south to the ice. And there they get stuck. They never reach Antarctica. The ship is crushed, they make camp on a floating ice block in extreme conditions and eventually, as the ice cracks and melts beneath them, they are discharged into open(ish) water where they make a break for one of the bleakest rocks on earth: Elephant Island. Shackleton and a small party (including a brilliant navigator) make a daring dash in a small boat across the wild Southern Ocean to bring rescue.

Lots of reasons why I loved this book. It’s classed as YA but doesn’t stint on the gutsy historical detail: the fate of the puppies, the disgusting food and conditions. There are details about the ship and equipment, the clothing and cooking. What happens to frostbitten feet. The cold. God, the cold. There’s no respite—ice forms on the pages as you read. There are useful maps, a timeline, and handily, sketches of all the crew. It’s a big cast and it would be easy to get lost in the characters—hard bitten men all—but they are kept easily in order by these drawings: Frank Worsley in his balaclava, Tom Crean with his pipe, young Perce Blackborow with his sticky-out ears. They’ve all got frozen noses.

I remain astounded by these men, their suffering and their stoicism, trusting to their own initiative, God, and luck to bring them home. So close to the end the men throw themselves down a mountain on a rope sled praying there’s no cliff below. It’s do or die. I can think of no modern equivalent—those on the end of extreme sports take risks but with high-tech kit, harnesses, sat navs and hospitals. Have we changed so much in 100 years?

I really hope so. After reading Shackleton’s Endurance, I’m happy to be a snowflake.