Book recommendations for the guys 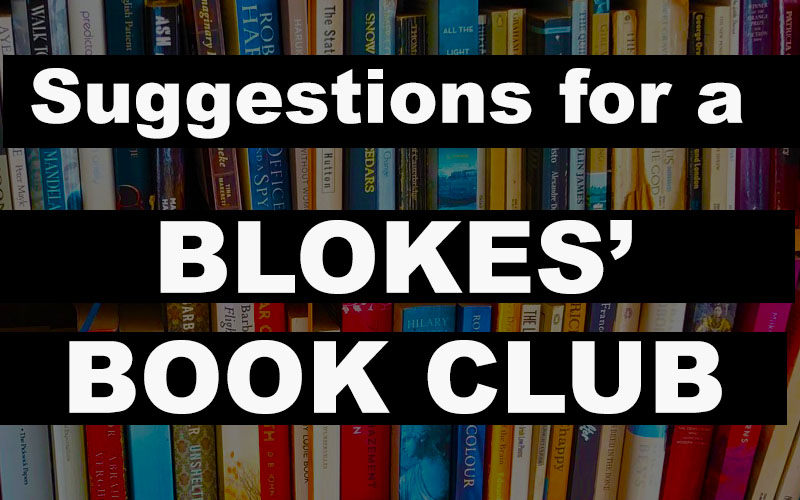 There are mostly blokes in my book club. We’ve been a good unit for years now, meet bi-monthly in our homes. We’re vaguely kept on track by Roy. It’s a different vibe to the women’s book clubs I’ve been to. There is no chatty gossip or confidences but we know we can count on absolute trust and life support from the group if required. We meet, sit outside or in depending on the season, wine is poured, and the host might say why he chose the book before we do a round robin and back to the host to lead a discussion. There is little talk about writing style, not much on character or theme, but lots of talk about the subject of the book in a wider context.

Are all blokes’ book clubs like this? I’d be interested to know. It seems to work well. I asked the guys for suggestions, and here’s a good starter list for a blokes’ book club, in no particular order.

Watching the Wheels, an autobiography by Damon Hill – provides an unexpectedly interesting look into the world of motor racing as it outlines the life history of an aspiring and ultimately successful racing car driver who just happens to be the son of a Formula 1 champion.

Faithful, autobiography by Marianne Faithful – offers an absorbing, no frills account of her roller coaster life as an icon in the rock music world

The Spy and the Traitor, by Ben MacIntyre. An amazing non-fiction account of a Soviet double spy who does heroic things for the West but is betrayed by a CIA operative and has to be rescued from Moscow

The World at Night, by  Alan Furst. One of many fiction books by Furst set in Europe late 30s and during WW2  involving ordinary folk performing heroic espionage tasks, sometimes at the cost of their lives and sometimes for no gain at all.  Gritty and realistic.  All are worth reading.

An Officer and a Spy, by Robert Harris. Story of the Dreyfus affair. Anti-semitism, spies and secrecy, state corruption and the scandal that led French writer Zola to make the famous “J’accuse!” headline. True history, fictionalised to bring it to life.

King Rich, by Joe Bennett was another recommendation and it’s good to see a kiwi author show up but some of the blokes thought it missed the sharp wit of his newspaper columns.

Zeitoun, by Dave Eggers is set in New Orleans in the aftermath of hurricane Katrina as the Syrian-American businessman helps out his community. The US Army and national guard take him into custody on suspicion of god know what, he is detained, refused medical attention and contact with his family.

When Breath Becomes Air, by Paul Kalanthi. This is the emotionally deep story of a renowned neurosurgeon faced with a terminal cancer himself. He struggles with the meaning of his life, and of life in general.

The Boy behind the curtain, by Tim Winton. The guys liked this a lot. Me, not such a rave. I reviewed this previously here.

The Humans, by Matt Haig. Funny sci-fi-ish story of Andrew Martin, mathematician, who dies and is replaced by an alien when his maths gets edgy. This is a good thing (particularly for Andrew’s wife) as the alien has more empathy than the man. What to do?

I Claudius, Robert Graves. All the guys liked this era so much we had a toga party to discuss it, which went well until my daughter unexpectedly arrived home early from university.

Stay alive my son, Pin Yathay. Horrors of the Khmer Rouge regime seen through one man’s family memoir through terror, malnutrition, disease, torture and death before a final escape towards the Thai boarder. How do you stay alive and who do you choose to save?

The Sellout, by Paul Beatty. Sardonic take on black culture. The blokes were divided on this; those who had spent time in America or follow American culture loved it. I’ve reviewed it separately here. If you’re a sensitive PC whitey, prepare for an uncomfortable read.

The Conductor, by Sarah Quigley. The conductor is Karl Eliasberg, the setting is the 1941-42 siege of Leningrad and the story follows the struggle to perform Shostakovich’s Leningrad Symphony during the terrifying Stalinist regime as everyone is slowly dying of cold and starvation.

Men Without Women, Haruki Murakami. Interesting psychological read.
[I can give you a pretty obvious reason why these men find themselves without women, but the blokes saw it differently.]

The Boys in the Boat, Daniel James Brown. Working class boys in 1930s America strive against the odds to make the Berlin Olympics. A good read if you’re sports obsessed–there may be too much detail if you’re not.

Birds without wings, Louis de Bernières. Political brutality that ripped apart the Ottoman Empire and set up the world for the century to come.
I’ve reviewed it here.

His Best Stories, by Witi Ihimaera. A walk into Māori culture, sometimes confrontational but every one a good conversation starter for some of the deeper issues in New Zealand.

The Eight Mountains, by Paulo Cognetti. With deceptively simple language this story follows a boy coming of age in the Italian mountains and describes how hard it is to come back after turning away from his father. Review of The Eight Mountains.

One Day in the Life of Ivan Denisovich, by Alexander Solzhenitsyn.
And you thought you were having a bad day.
Spend a day in a Siberian labour camp.

All of these books are gutsy enough to get a lively discussion going and therefore good for book clubs, as recommended by the blokes. Hope it inspires some others to set up groups.