On board the Polly Woodside 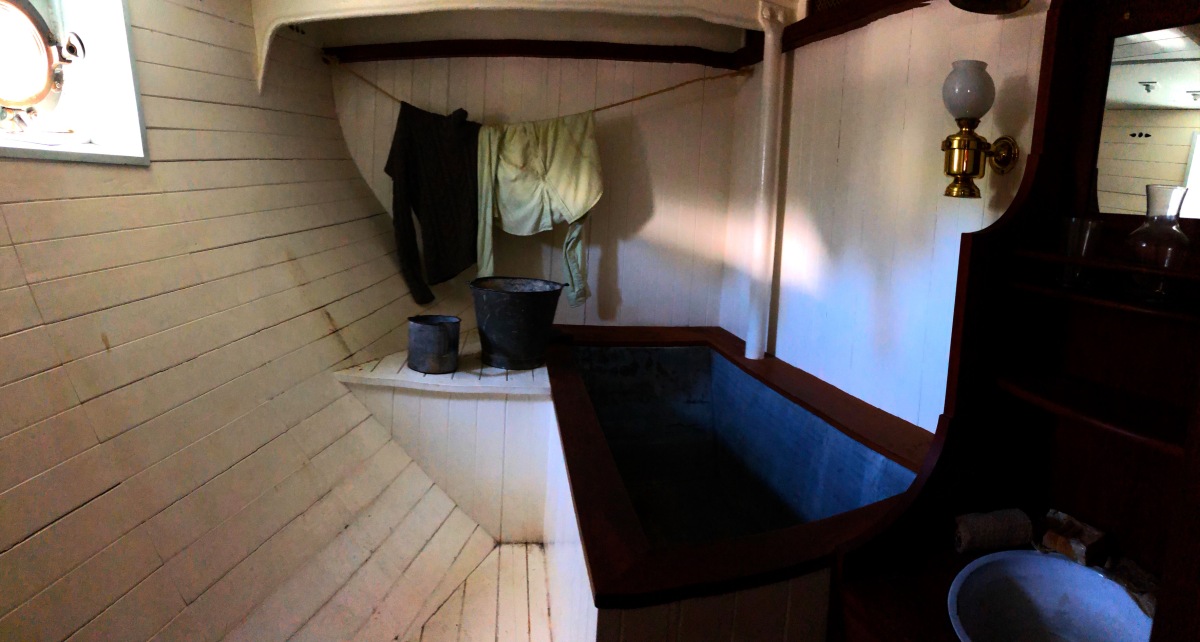 It’s rare to walk around a museum in a ship. The Polly Woodside is just that; it is a wee historical treasure berthed on the South Bank at Melbourne. At first glance she looks uninspiring, locked in with boardwalks and surrounded by restaurants and bars, a big iron hulk of a thing with shabby paintwork and painted gun ports. It’s hard to get a sense of her scale and grace when you’re peering over the fence and the music’s blaring. We walked past her a couple of times before deciding to go back.

The entry hall shows an exhibit of the Polly Woodside, with photos and memorabilia and a good short film based on a diary by the ship’s carpenter. There are ropes to pull and wheels to turn  and you can lose your balance in a tunnel with a swinging horizon.

Past this, you climb on board the ship. I get pretty excited by tall ships, but a land-locked ship is not particularly inspiring and this one lacks sails, and rigging and top masts. She’s a three masted sailing barque, with a 59m deck and 9m beam, which makes her twice as long as Cook’s Endeavour and a little broader.  My family came to New Zealand from Norway on the Hövding in 1872 on a smaller ship with 376 passengers, plus crew. You get a feel for how cramped the conditions would have been if they all came on deck at the same time.  But you get no feeling for being at sea when you’re on a deck overlooking a  busy public walkway.

So we went below, to the cabins. That’s where the magic begins.

The captain had a bathroom. With a fair sized bath. It fits snugly into the curve of the stern and is deep enough to soak in. (I know because I climbed in – not sure if that was allowed). How glorious, to come below after a freezing watch battling the elements and soak in a hot tub. I’m hoping he had bath salts and a fluffy towel.  His cabin was as smart as a little cottage bedroom, a good sized bunk over a bank of drawers (they were little men back in the day), a wide desk, a comfortable chair. A sofa. After all the legends of deprivations at sea, here was a man who travelled well! 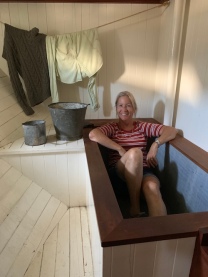 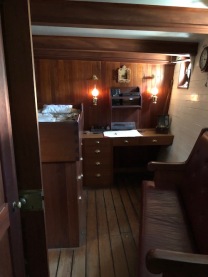 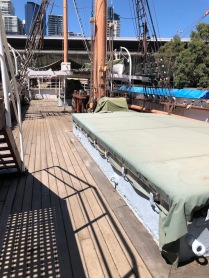 Next to the Captain’s cabin was a tidy and well appointed cabin for the cook. I’d thought a lowly cook would lodge with the workers on the fore deck, but he was tucked behind a neat pantry and I’m guessing may have whipped up the odd post-bath snack. The accommodation details were lovely: the “fiddles” or small rails on the edges of tables to stop the captain’s dinner tumbling into his lap, the dark wood furnishings, the bucket next to the dunny which I assume the cabin boy would keep filled with salt water, the hanging lamps to keep the flame upright in a swell, the bunks stepped into the curve of the ship. There were unexpected things, too: an open fireplace in the saloon, pretty frosted glass, the generous proportion of the cabins.

Launched in Belfast in 1885, near the end of the sailing ship era, the Polly Woodside circumnavigated the world seventeen times, loaded with wheat or coal. If you’re in Melbourne, go and have a look. Below decks, she’s fascinating.