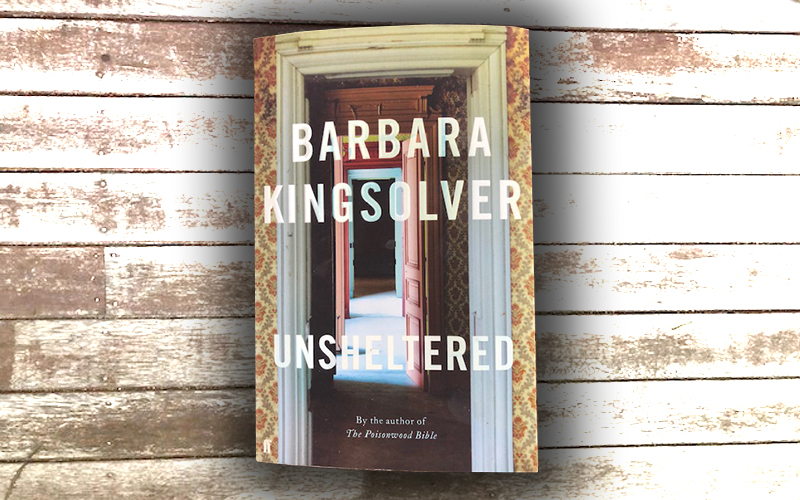 Other reveiws of Barbara Kingsolver’s Unsheltered focus on the political; the coy way that Trump shadows the book but is never mentioned by name, the crisis in mid-America in employment, health, etc, our hurtle towards ecological crisis. It has all this; it is trademark Kingsolver.

But I read the book very literally.  To be unsheltered is a primal fear. Unsheltered gave me goosebumps. It is as threatening as a horror story, more so because the menace lies in the undercurrents while things on the surface look good enough.

There are two threads to the story. Two respectable families live on the same plot of land in a purpose-built Christian town called Vineland, 145 years apart, both in a house crumbling rather dramatically around them and without the wherewithal to fix it and shelter the family within.

In the modern story there is an aged parent who needs the sheltering cover of insurance from the ravages of disease eating his lungs, a baby who needs emotional shelter, a woman who suicides – there is a lack of shelter there for sure – her young husband left with a hole in his life, a father whose sheltering tenure has come to an end, his wife, Willa – who tells the story –  who has lost the shelter of a regular income. Things disintegrate both literally and figuratively. Willa recognises her fear of being unprotected. It is her her daughter, Tig, our future, our hope, who deliberately places herself outside the prevailing mindset to find a different type of shelter.

Go back to 1871 and Thatcher Greenwood, newly wed, stands in the same place, with the same problems of cracking walls and a collapsing roof. He has a mother and sister-in-law to contend with, and a young wife who wants more than he can offer. Thatcher teaches science at the local school and steps outside the comforting shelter of God’s world to introduce Darwin to his students, a sin with dire consequences in the conservative town.

Another star of the story, who ties the two time periods together, is Mary Treat – a real entomologist who corresponded with the era’s great natural thinkers including Darwin and Asa Grey. We first come across her lying face down in the long grass, bewildering the neighbours, studying ants. When Thatcher stumbles into her living room she is sitting very still with her finger in a venus fly trap, patiently observing whether her skin will dissolve.

In the 1870s Thatcher turns to this remarkable woman for intellectual stimulation. In 2016 Willa, too, discovers Mary Treat’s letters and journals and recognises an unsheltered woman (a husband went astray) who builds herself a new life from the threads of her research, just as the spiders she studies spin new webs when theirs are destroyed.

This is a story of complex relationships. The many threads binding the characters together feel poignant and real. The unexpected makes them vivid. I love Willa’s growing awe for the daughter she struggles to understand: “A thousand times she’d asked her mother after this wilding was born, could a mother and child just have bad chemistry? She’d spent years putting careful love letters into Tig’s psychic mailbox when what the girl seemed to want in there was birdsong, or a bucket of frogs.”

And later, this little gem: “A mother can only be as happy as her unhappiest child.”
Oh! Break my heart!

As the story goes on, it is the wild child, Tig, who gets the best lines. I love this character, she’s a spit in the eye to all those who moan about the entitled younger generation. We should all sit down and listen to the Tigs in our lives.

She tells her mother, none too kindly: “You prepared for the wrong future. It’s not just you. Everybody your age is, like, crouching inside this box made out of what they already believe. You think it’s a fallout shelter or something but it’s a shit piece of box, mom…”

Ouch. But later on, she offers her mother kinder words of comfort, and I take these as a prophesy from the younger generation to the old.

“I’m saying when God slams a door on you it’s probably a shitstorm. You’re going to end up in rubble. But that’s OK because without all that crap overhead, you’re standing in daylight.”

Scary, as a prediction of where we are headed. But bold.

One thought on “Unsheltered – book review”