Glass Houses and other stories, by Karen Phillips 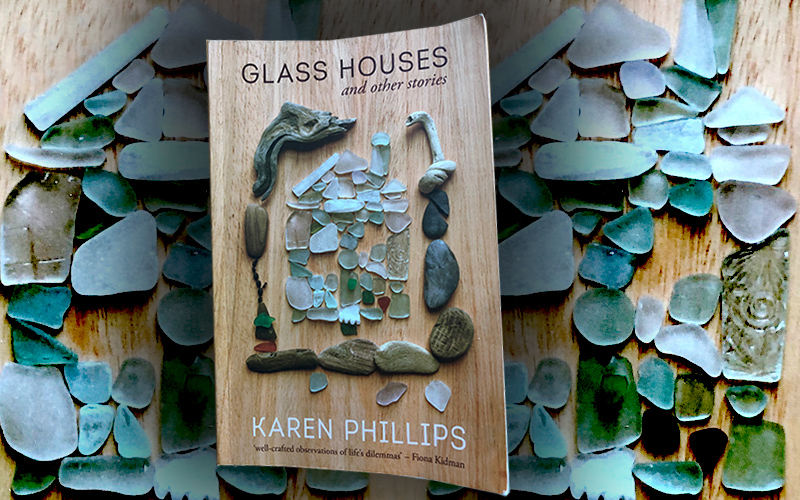 Each story in this collection is a piece of sea glass: a tiny part of a much bigger story, hard edges worn away, polished and immediately recognisable as precious.

There are fourteen stories, mostly about family relationships and all very kiwi in place and culture, related by someone in their later years. In every story life has thrown up a glitch: dementia of a loved one, death of a child, a son travelling in a danger zone and out of touch, observations in a supermarket queue. I met Karen Phillips last night and asked her about her characters, who often seem to be peripheral to the main story going past at a faster clip and she agreed that she sees and wonders about the people on the edges.

There is an elderly couple who see an image of their downstairs rental on the news. The tenant had just moved out after doing a “young man’s clean” and Rona has had to scrub the skirting boards. Turns out they’ve been harbouring a murderer. We don’t follow the story of the murder, but the emotions of the woman whose house is on the news. There’s a whole story in the background the reader is left to imagine.

The title story, Glass Houses, could be about a little boy whose parents split and, on a visit home from Australia, the mother visits her ex’s parents. But instead, Phillips tells the story from the grandmother’s viewpoint, whose access to the child now depends to a large extent on this ex-wife, who she wasn’t very keen on initially. Before the child was born she wished the girl would “drop out” of her son’s life. But here she is, visiting with the mokopuna and it’s fragile and beautiful and strong as sea glass. The go to the beach for a picnic and, back home, the boy helps his grandma with a glass collage of a house.

These are vignettes for people hitting late mid-life and wondering about what their future holds as they cede control to the younger generation. The events are recognisable; it’s easy to imagine the wider story that wraps around each one. They are slightly old-fashioned in the best sense, in that the story and the clear language speak for themselves without the need for tricks or twists to hook you in. The writing does that. They’re well observed slices of life, crafted for effortless, enjoyable reading.