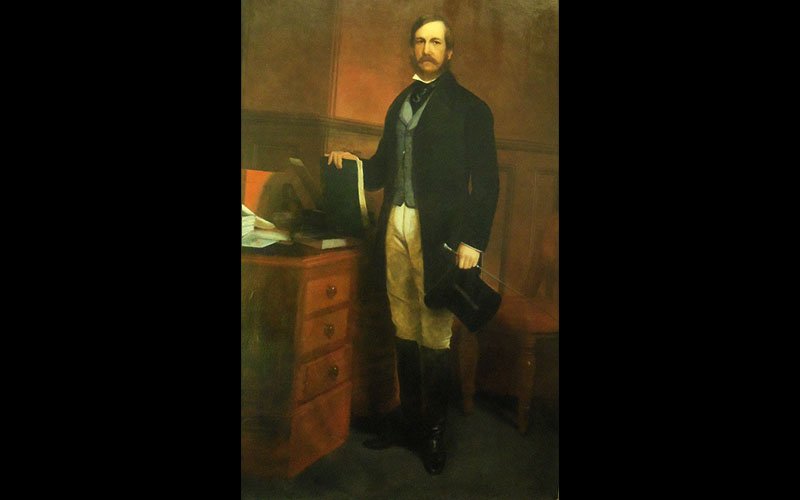 Colonial Wellington’s original wild boy, Jerningham Wakefield, was born 200 years ago today. The son of New Zealand Company founder Edward Gibbon Wakefield, Jerningham was a member of the advance party of the Wellington colony, arriving in Port Nicholson on the Tory in September 1839. He was nineteen years old and sent away from England by his father to keep him out of mischief. It was a mistake Edward Gibbon probably came to regret.

Most early colonials came to preach or pillage. Jerningham came to play.

Te Ara encyclopaedia says of Jerningham: “He was marked throughout his life, and beyond it, by a damning reputation for flawed and wasted brilliance. Most commentators, including his own father, dismiss him as a wastrel and a failure, talented and intelligent, but reckless, weak-willed, contentious, promiscuous and generally unstable.”

Jerningham was under the care of his uncle Colonel William Wakefield, Agent for the New Zealand Company, who had a hard time keeping the boy in check but who also gave him tasks well beyond his age and experience. Jerningham acted as his uncle’s secretary, he prepared the Port Nicholson land sale deed and was responsible for the New Zealand Company’s purchases in Wanganui, where he set up a mock baronial hall as his residence he called Whare Wikitoria, an “open house with midnight orgies,” according to one missionary. He was also present at the debacle in Taranaki where huge tracts of land were purchased by the New Zealand Company and almost immediately disputed as Māori, dispersed in tribal wars, began to return home to find settlers on their ancestral land.

Jerningham made his name with his book, Adventure in New Zealand, drawn from his journals and published on his return to London in 1845. It’s a wonderful romp around the country, with Jerningham the hero of every escapade. He travels widely and each adventure is thrilling: the dash of a waka through the rapids; the bravery of shipwrecked men; the grandeur of the landscape. Despite the narcissism, he is, however, a talented observer and recorder, and much of what we know of the early 1840s has come through Jerningham’s writing. He was one of the few who went out amongst the Māori, learned te reo and immersed himself in the culture and whakapapa. He hobnobbed with sailors and traders and learnt their skills, bred dogs and hunted pigs, he put to sea in whale boats and wrote extraordinarily detailed descriptions of whalers’ lives. The resistance from government and missionaries to the New Zealand Company’s ambitions drove Jerningham to write deliciously snarky criticisms of these institutions but there was truth in his opposition, no matter how self-serving.

Jerningham’s book became a best-seller and was influential in whipping up the excitement of colonisation ‘back home’. A review of Adventure in New Zealand in The Examiner newspaper of that year says: “The most complete account we have had of British colonisation in New Zealand. It is an important work in that respect, and in others extremely interesting. It is a book full of flowing, vigorous, hearty life, and written with manliness and purpose.”

Unfortunately the manliness and purpose was not appreciated by all, and the scandals surrounding Jerningham grew. He had some colourful criticisms levelled against him. His father, who had this stage not visited New Zealand, accused him of “colonial habits” (drinking), and “a turn for wrangling”. Fellow colonists spoke of his “riots and debaucheries”. The Reverend Tursow, in an article in 1846, complained that he ridiculed the missionaries, scoffed at religion, broke the sabbath, and worse. He accused him of: “sauntering about in a blanket – singing lewd hakas and waitas – galloping about with females on horseback – and squatting in the warm baths of Taupo with both sexes, in a state of nudity, for hours together.” He had illicit connection with three girls at the same time, debauched at least half-a-hundred others and was given the disreputable cognomen of “Toa”. His general conduct in New Zealand, his critics agreed, was profligate and debasing in the lowest degree.

Governor FitzRoy, arriving in 1843, quickly formed a strong and probably well founded antipathy to Jerningham. He accused him of childish bravado, and, because of his sneering and sarcasm to missionaries, an “enemy to religion”. He was “the devil’s missionary,” a damning insult for the era. FitzRoy dressed him down and struck him off as a magistrate.

The damage to Jerningham’s character, so blackened by his detractors, left him no option but to leave the colony and return home his father, taking his hedonistic lifestyle with him. And once home, he smartly returned all insults with the publication of his brilliant book.

We celebrated Jerningham’s 200th birthday with bookend parties the day before and the day after, coinciding with the publication of Jerningham.
For a photo gallery of these two events, see Jerningham launch parties.