The Animals in that Country, by Laura Jean McKay 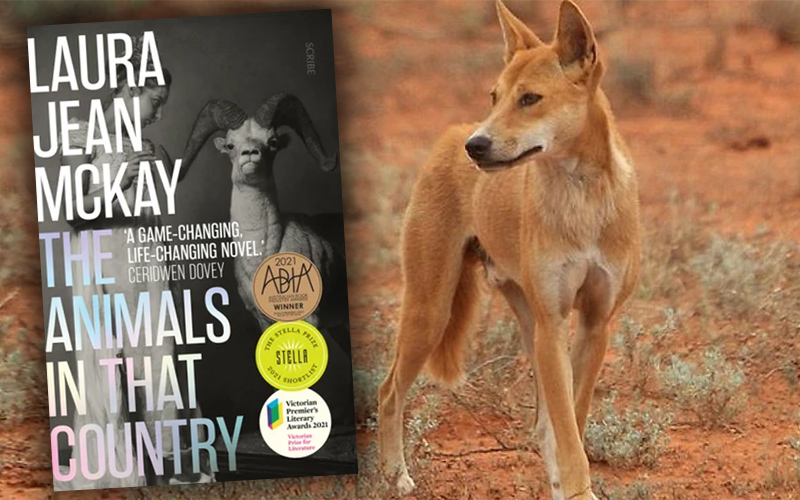 Brilliant and intriguing book. And me someone who has avoided fantasy for decades. Don’t read the blurb about ‘talking animals’—this is not Dr Dolittle— read the excited hype from right across the review spectrum and watch the awards list grow.

Jean is an unlikely heroine. She’s a rough bit of work: a hard drinking, chain smoking, promiscuous, internet-troll of a grandmother who makes bad choices. Her colleague Andy is one, she calls him when she wants booze or sex. He’s ‘hairy and stringy, skin stretched over his big belly’ with a jealous boyfriend on the side. Jean’s love for her six-year-old granddaughter is her one redeeming feature, though I wouldn’t trust her to look after any child of mine.

Jean works as a guide in a wildlife sanctuary in Northern Australia run by her daughter-in-law (the son’s legged it), not bright enough to pass her ranger qualifications so she drives the train, cracks bad jokes for the tourists, imagining what the animals would say if they could talk back to her. It’s pathetically corny. But somehow, and I’m not sure how, by about half way through the book I’m totally on her side. She doesn’t change. Same old Jean with her impulsive, destructive behaviour. It’s the world that changes around her.

In this story, modern Australia gets ‘zooflu’, a fast-spreading virus, easily diagnosed by pink eyeballs. Doesn’t seem to directly harm people, no one is dying, but something loosens in their brains which gives them such high empathy with animals they’re communicating—translating animal smells and behaviour into words and ‘talking’ back. It’s nothing like Jean’s make-believe world. Animals’ concerns are pretty basic: safety, food, sex (ha, a bit like Jean’s, really.) Though you don’t want to know what a caged mouse thinks before it eats its own.

We get a glimpse of the big picture chaos that follows the flu through Jean’s interpretation of the news. Connections fail and the sanctuary is closed and barricaded, but the science of it all is, thankfully, not part of this story. There are no white coated scientists or spinning politicians in the background to make it plausible. Doesn’t matter how it happened, Jean doesn’t care. Zooflu gets into the sanctuary and the staff all start hearing the animals’ chatter. People make strong connections to various species: some get obsessed with rodents or insects, birds are fierce communicators, the crocodile picks a target and Jean’s son turns up and steals her granddaughter away for a journey to the whales. They call to him across the vast continent and are irresistible.

There’s a dingo in the sanctuary called Sue. Jean found her as a baby, they bonded and now Jean can hear her talking. She translates:
The
one made of bones and
biscuits. The (Yesterday) party.
I’m here for the
Queen

Sue is one of the more coherent of the animals. This is the brilliance of this book. The animals aren’t talking, they’re thinking and heard. Jean walks away from the dingo and “her reek calls:
Bowel movement (short and golden)
Sit
(Yesterday), stay
all the way down the track.”

The staccato dialogue sounds like me talking to myself this morning: Put it there. Late. No cotton (should see it), reposting to thingy. I’m guessing all sentient beings have this in our heads and it’s not just me and Laura Jean McKay? Looking at my dog, I know he thinks the same.

The whales, though. When the whales start calling I can almost hear them. There is something fundamental about whales and McKay nails them, their voices giving me that strange sensation I get occasionally when floating in the sea: that this is where we came from, this is home. Perhaps something in our vast brains can remember back that far. Chilling.

Extraordinarily, this book was conceived well before Covid: the border closures, panic buying and lockdowns entirely predictable. Talking animals though…

Turn around and I’ll
stick it
in. Your
feet are fucking
ancient.

One thought on “The Animals in that Country”