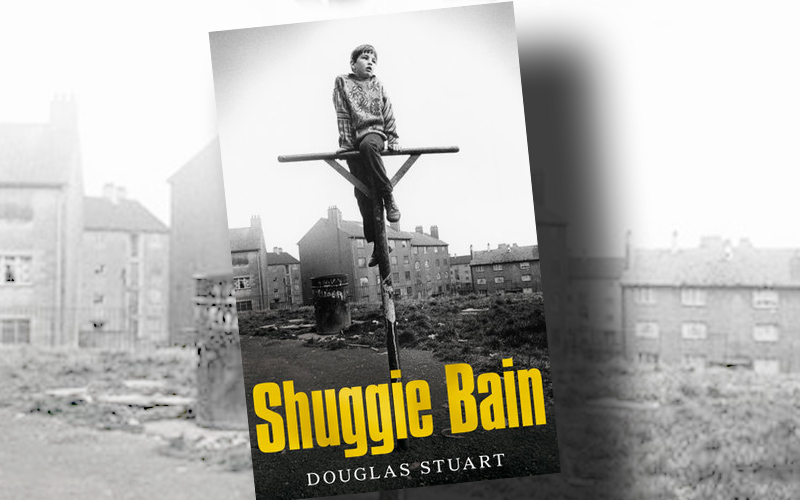 The poor wean. There’s love, but it’s inconsistent and unreliable, a selfish love given up in tiny doses. There’s food, occasionally, perhaps a tin of custard. I’m thinking of Maslow’s hierarchy of needs and realise Shuggie doesn’t even get off the ground floor. He can’t tick off a thing.

This isn’t set in some medieval squalor, though the descriptions sometimes feel that way. This is Glasgow in the 1980s, Thatcher’s Britain and a miserable place. “Rain was the natural state of Glasgow. It kept the grass green and the people pale and bronchial.” There were pit closures and hopelessness and the disintegration of a whole slice of society who dropped into poverty. I don’t doubt these lives existed but I do wonder how the Glaswegians feel about the awfulness of the depiction. I got married in 1990 in Glasgow and that year it was the European City of Culture, vibrant and exciting, but perhaps part of that was that edgy underbelly beneath the cool, patches over the rawness, the city making a real effort to look forwards with rose tinted glasses.

The story alternates between Agnes and Shuggie, her youngest child. Agnes puts her energy and sense of worth into looking smart, in full makeup with good clothes and heels, bleached dentures, even her slummy house is nicely presented. But that’s it. Under the hairspray is a self-indulgent bitch, a victim yes, but it’s hard to have any sympathy for someone so willfully self-destructive. Everybody leaves Agnes. Of course they do! She’s a terrible mother and partner and a drunk who will sell anything for a can of Special Brew. She should be unlovable, right? But Shuggie loves her and so we, as readers and undeniably on the side of this awkward struggling boy, must find it in our hearts to root for Agnes. To wish her the best. To plead with her to stay in, not pick up the phone, to buy groceries rather than booze, to hold her scalding tongue, to be nicer to people who might love her, to love Shuggie.

Shuggie battles for his mother. Even before he leaves the house to face the school bullies he’s failing to keep her sober:

“If Shuggie was home from school, he wouldn’t let the women in. Even before the first postman had come, they were there with heavy bags in hand. At the front door they looked almost like good people, but he knew better. He tried to politely push them back down the stone stairs many times. He would lock the door, and they would call through the letter box, “Is your mammy no home?” and plead, “I’ve just come over for a wee cup of tea.” He wanted to stick forks through the opening into their thin faces as Agnes lay broken inside the house, her bones shaking, guts calling out for a taste of warm lager. Like a cold draught, they always pushed in.”

Shuggie’s dad is Big Shug, one of the taxi drivers who haunt Agnes’ life. He’s a prick, as are all the others. He doesn’t want Shuggie. Nor do Shuggie’s sister and brother, who take off at the first opportunity. Shuggie’s left alone to wipe the vomit from his mother’s face and note the bruises on her body left by rough men who buy her drinks and use her badly.

It’s all really, really miserable, but there is a tiny spark of life that it’s hard to ignore, a hope that things will eventually get better. There’s a brittle something, hard and indestructible, an attitude that holds a middle finger up to the world. That’s what keeps you reading. The hope that Shuggie will, against the odds, survive all this shit and start his climb up Maslow’s hierarchy of needs to self-actualisation by way of food and safety and love and security.

There’s a scene that illustrates this, where Shuggie is dancing with gay abandon (yep, pretty much) and the neighbourhood bullies are watching through the window. Agnes tell him not to stop.

““Just hold your head up high and Gie. It. Laldy.” She was no use at maths homework, and some days you could starve rather than get a hot meal from her, but Shuggie looked at her now and understood this was where she excelled. Everyday with the make-up on and her hair done, she climbed out of her grave and held her head high. When she had disgraced herself with drink, she got up the next day, put on her best coat, and faced the world. When her belly was empty and her weans were hungry, she did her hair and let the world think otherwise.”

So Shuggie dances. Is that enough to suggest hope for the future? That’s about as optimistic as it gets. Glad it won the 2020 Booker Prize, that’s a happy ending if ever there was.

Don’t give it to anyone you’re sharing Christmas with though, you’ll just make them really miserable.